Sound and Soundscape By: Rouzbeh Rashidi

Make Up and Set Design By: Atoosa Pour Hosseini

Funded By The Arts Council Of Ireland / An Chomhairle Ealaíon. 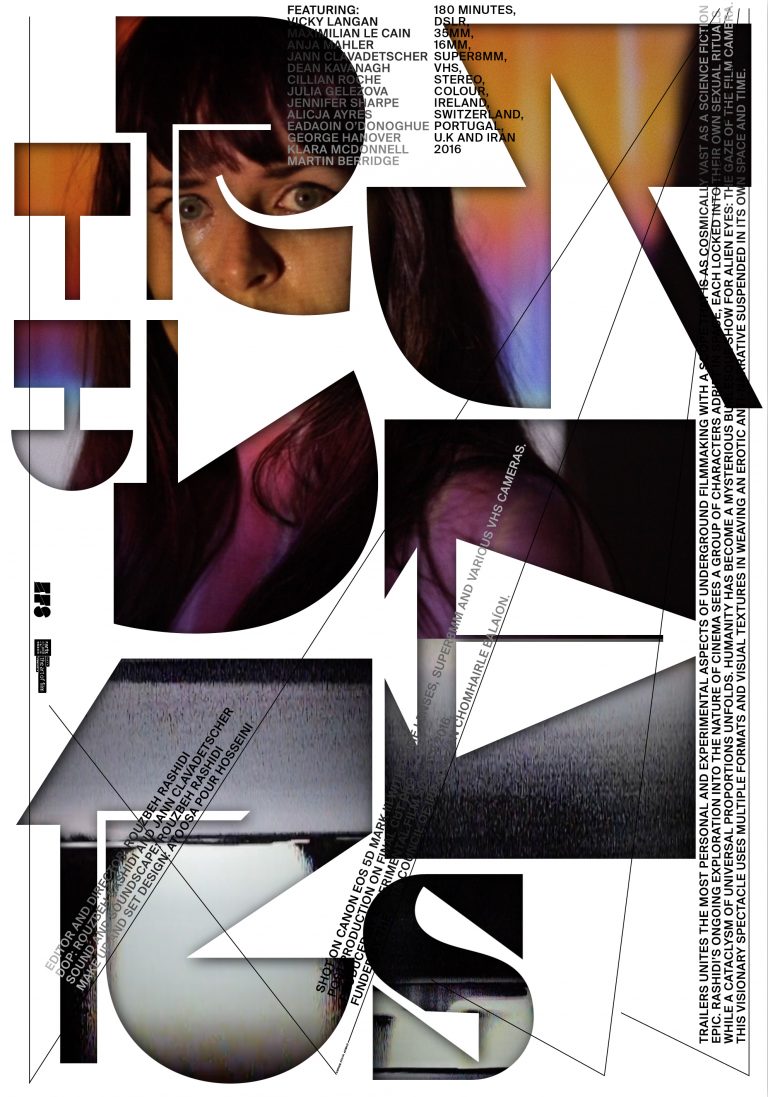 “It might reasonably have been thought impossible that a film would ever be made that could be described as an ‘underground epic’ without any hint of irony. Yet Trailers is that film.” – Irish Examiner

“Like many other great experimental films, this film (Trailers) gives me a unique and indescribable experience.” – Jit Phokaew

“One of the best cinematic experiences of my life.” – Wannabe Cinephile

“Rashidi is pursuing his own investigation into the nature of cinema in all its forms and possibilities, as he did in his previous films, always trying to capture the deep cinema essence. In this movie, he seems to accomplish his goal: by using powerful images, a perfect editing technique and a superb direction and with the help of the soundtrack, Rashidi can really catch the heart of the cinema and go further, reformulating this way the concept of cinema. He reinterprets the cinema as a process of continuous decomposition and aggregation of all its elements and also as a universal cataclysm that with its destructive power does not spare even those few strange characters, who are the symbol of a now drifting humanity.” – CinePensieri

“A disturbing film. Disturbing because it messes up, disorder, subvert the set of rules that establish the structure of a film. A formless object that lives out of the thought in a radically personal dimension giving space only to chaos, the triumph of darkness, something impossible to confine in the cage of dialectic.” – Cinepaxy

“Rouzbeh is proving to be forging his own path, making distinctly personal films that grow in ambition, skill and vision from one film to the next. You never quite know what experience you will have when sitting down to watch his films but you will always be surprised. His films are never predictable, they are alive and they give to the viewer something that is very rare in 99 percent of films being made today, they give you the possibility to participate in the experience, they challenge you on what your idea of cinema is and can be, and they make you deeply aware of the process of viewing a film. This is not to say the films are only intellectual experiences, in fact they are deeply human, organic creations filled with imagination and personal obsessions and fantasies that provoke the viewer’s sensibilities on many levels, and by stepping into these mysterious worlds one is confronted with oneself. This, in our view, makes them outstanding and deeply relevant works of art.” – Film Panic

“Rouzbeh Rashidi is the prototype of (true) filmmaker of the future: one who makes films ‘at home’ and who has spent his life watching the films of others; naked and raw cinephilia, which travels on a completely different level compared to institutional study. We are already in the Cinema, which acts thaumaturgically on existence, thus making it deformed. So, apparently ‘making Cinema’ (for real) is the significant purpose of loving (and being) those deformations; and Trailers itself is precisely an essay about significant purposes.” – Post Tenebras Cinema

To request or book a screening of TRAILERS, please contact: